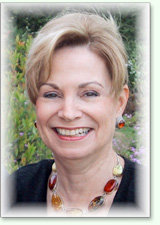 Diane Davis Jones began her journey into becoming who she is today by joining the Peace Corps at age 19, answering President John F. Kennedy's call to serve her country. Embracing Spanish as her second language, she served as a Peace Corps Volunteer in Ecuador and Chile and on Peace Corps staff in Venezuela and at Peace Corps headquarters in Washington, D. C. After completing her Peace Corps service, Diane obtained her BA degree in Sociology from the University of Rhode Island and her MA in Social Sciences from California State University at Fullerton, CA.

After completing her education, she began a career as an administrator in municipal government. In 2004, she retired from the City of Simi Valley, California, where she held the positions of Director of Human Resources, Director of Environmental Services and Director of Community Services.

Diane and Dennis Merritt Jones were married in 1994. As their spiritual partnership deepened, their joint vision for their life together evolved into what is now their passion and purpose on the planet. In 2008, when Dennis retired from twenty-three years of pulpit ministry, they embarked on a journey of expanding the outreach of their business, DMJ Presentations LLC. Their expanded outreach now includes Dennis' multiple award winning books released by Tarcher/Penguin, keynote speaking, seminars and personal spiritual mentoring. Diane's organizational skills as CEO and administrator for DMJ Presentations LLC, mixed with her vision and passion for serving others in ways that make the world a better place, is a primary cornerstone to their business success.